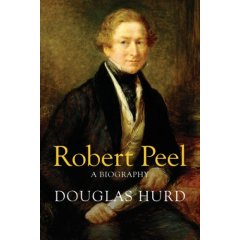 This book was certainly a bit of a struggle, at times, but worth it (I think) in the end!

My own interest in political biographies lies mainly in those post Second World War lives – and many of those names will be familiar to you.  This volume attracted me for a couple of reasons.  First, my last parish (Middleton with Wishaw) was next to Drayton, where the Peel family home once was – (It’s now a theme park with very little of the original house remaining).  There is a handsome statue dedicated to Peel in the neighbouring town of Tamworth.  Second, this biography was written by a modern politician, Douglas Hurd.  I was interested to know more about the person and how Hurd went about his biographical judgements in the light of his own experience and career.

I had failed to remember from my own ‘A’ level studies what a significant figure Robert Peel was.  Peel’s legacy still influences our modern way of life.  He created the modern police force.  His ‘Tamworth manifesto’ is seen as the basis of enlightened Conservatism.  It was Peel who introduced the income tax and is remembered for repealing the Corn Laws.  Like all powerful people he attracted a range of opinions.  Hurd attempts to give a balanced view but, in certain critical moments, fails to rise above his own political convictions and so often dismisses views and perspectives that differ from his.  It is unfortunate that he constantly gives way to rather sweeping criticism of the Labour government and fails to offer any critique of Thatcherism and those years of Conservative government.

Compare these sorts of political judgements to Roy Jenkins, who, in his biography of Churchill is absolutely consistently fair in his judgements across the political divides.

However, one must admire Hurd’s energy and industry.  In the acknowledgements page of the book Hurd tells us that he’s written this book in long hand over three years on many tables.  His search for Peel and his story took Hurd to many places.  Both acknowledgment pages run to eight in total with over a hundred names who have helped the process through research and conversation.  At this level, one is full of admiration for Hurd’s achievement.

What a different world – and how removed the houses of Parliament were from life beyond London and the aristocratic families of the day.  Hurd tells of power, influence and fortune.  Peel secures these through dedicated public service.  His tough political judgement gave him a fearless sense of movement and the necessity of change for the common good.