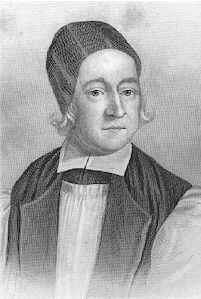 Ken was born in 1637 at Little Berkhampstead, Hertfordshire. His father was Thomas Ken of Furnival’s Inn, of the Ken family of Ken Place, in Somerset; his mother was the daughter of little known English poet, John Chalkhill. In 1646 Ken’s stepsister, Anne, married Izaak Walton, author of The Compleat Angler, a connection which brought Ken under the influence of this gentle and devout man.

In 1652 Ken entered Winchester College, and in 1656 became a student of Hart Hall, Oxford. He gained a fellowship at New College in 1657, and proceeded B.A. in 1661 and M.A. in 1664. He was for some time tutor of his college; but the most characteristic reminiscence of his university life is the mention made by Anthony Wood that in the musical gatherings of the time Thomas Ken of New College, a junior, would be sometimes among them, and sing his part. Ordained in 1662, he successively held the livings of Little Easton in Essex, St. Mary’s Church, Brighstone (sometimes called Brixton) in the Isle of Wight, and East Woodhay in Hampshire; in 1672 he resigned the last of these, and returned to Winchester, being by this time a prebendary of the cathedral, and chaplain to the bishop, as well as a fellow of Winchester College.

He remained there for several years, acting as curate in one of the lowest districts, preparing his Manual of Prayers for the use of the Scholars of Winchester College (first published in 1674), and composing hymns. It was at this time that he wrote, primarily for the same body as his prayers, his morning, evening and midnight hymns, the first two of which, beginning “Awake, my soul, and with the sun” and “Glory to Thee, my God, this night,” are well known. The latter is often made to begin with the line “All praise to Thee, my God, this night,” but in the earlier editions over which Ken had control, the line is as first given. Both of these hymns end with a doxology beginning “Praise God, from whom all blessings flow,” which is widely sung today by itself, often to the tune Old 100th.

In 1674 Ken paid a visit to Rome in company with young Izaak Walton, and this journey seems mainly to have resulted in confirming his regard for the Anglican communion.

Although Ken wrote much poetry, besides his hymns, he cannot be called a great poet; but he had that fine combination of spiritual insight and feeling with poetic taste which marks all great hymnwriters. As a hymnwriter he has had few equals in England; it can scarcely be said that even John Keble, though possessed of much rarer poetic gifts, surpassed him in his own sphere. In his own day he took high rank as a pulpit orator, and even royalty had to beg for a seat amongst his audiences; but his sermons are now forgotten. He lives in history, apart from his three hymns, mainly as a man of unstained purity and invincible fidelity, to conscience, weak only in a certain narrowness of view which is a frequent attribute of the intense character which he possessed. As an ecclesiastic he was a High Churchman of the old school.

Ken’s poetical works were published in collected form in four volumes by W Hawkins, his relative and executor, in 1721; his prose works were issued in 1838 in one volume, under the editorship of J.T. Round.

He was buried at the Church of St. John the Baptist, Frome  where his crypt can still be seen.