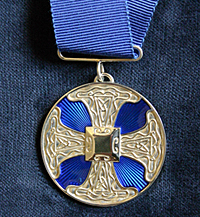 The Cross of St Augustine was founded by Archbishop Michael Ramsey. It was first awarded by him on 19 February 1965. It is a circular medallion bearing a replica of the 8th Century Cross of Canterbury and on the reverse side is an engraving of the chair of St Augustine at Canterbury. The ribbon is of “Canterbury Blue” and it is worn around the neck by clergy and on the left breast by lay people.

This award has historically been awarded to clergy and lay people of foreign churches who have contributed conspicuously to advancing friendly relations with the churches of the Anglican Communion. More recently it has also been given for outstanding service within the Church of England whether centrally or in the dioceses, or the Anglican Communion as a whole, and to those who have contributed to advancing relations between the various Christian communions and churches.

Last Friday evening the Archbishop awarded the Cross to a freind of mine who has made an extraordinary contribution the the maginlaised of the Church – here is the citation:

helped raise £4.5 million pounds to convert an old school to become the London Lighthouse which cared for people suffering from HIV/Aids. At its height it was helping over 1,000 a week and Andrew, who was the Lighthouse’s Chairman for fifteen years, went on to co-found CARA – ‘Care and Resources for people living with Aids.’ A non-stipendiary priest (he was a Director of Social Services for Kensington and Chelsea) his ‘secular ministry’ has been a brilliant success.