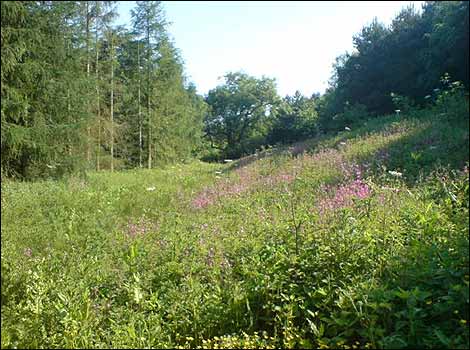 In spring, the axis of the Earth is increasing its tilt toward the Sun and the length of daylight rapidly increases for the relevant hemisphere. The hemisphere begins to warm significantly causing new plant growth to “spring forth,” giving the season its name. Snow, if a normal part of winter, begins to melt, and streams swell with runoff. Frosts, if a normal part of winter, become less severe.

Temperate climates have no snow and rare frosts, the air and ground temperature increases more rapidly. Many flowering plants bloom this time of year, in a long succession sometimes beginning even if snow is still on the ground, continuing into early summer. In normally snowless areas “spring” may begin as early as February (Northern Hemisphere) heralded by the blooming of deciduous magnolias, cherries, and quince, or August (Southern Hemisphere) in the same way.

Subtropical and tropical areas have climates better described in terms of other seasons, e.g. dry or wet, or monsoonal, or cyclonic. Often the cultures have locally defined names for seasons which have little equivalence to the terms originating in Europe. Many temperate areas have a dry spring, and wet autumn (fall), which brings about flowering in this season more consistent with the need for water as well as warmth.

While spring is a result of the warmth caused by the turning of the Earth’s axis, the weather in many parts of the world is overlain by events which appear very erratic taken on a year-to-year basis. The rainfall in spring (or any season) follows trends more related to longer cycles or events created by ocean currents and ocean temperatures.

Unstable weather may more often occur during spring, when warm air begins on occasions to invade from lower latitudes, while cold air is still pushing on occasions from the Polar regions. Flooding is also most common in and near mountainous areas during this time of year because of snowmelt, accelerated by warm rains.

Spring is seen as a time of growth, renewal, of new life (both plant and animal) being born. The term is also used more generally as a metaphor for the start of better times, as in the Prague Spring. Spring in the Southern Hemisphere is different in several significant ways to that of the Northern Hemisphere. This is because: there is no land bridge between Southern Hemisphere countries and the Antarctic zone capable of bringing in cold air without the temperature-mitigating effects of extensive tracts of water; the vastly greater amount of ocean in the Southern Hemisphere at all latitudes; at this time in Earth’s geologic history the Earth has an orbit which brings it in closer to the Southern Hemisphere for its warmer seasons; there is a circumpolar flow of air (the roaring 40s and 50s) uninterrupted by large land masses; no equivalent jet streams; and the peculiarities of the reversing ocean currents in the Pacific.