I salute the work of this very remarkable man – who I met while on sabbatical in 2008 in Washington DC.

His influence on our thinking about old age has been pioneering. 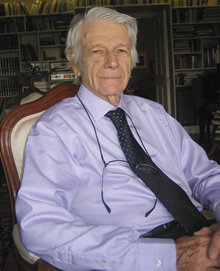 Before passing away from acute leukemia on July 4, 2010, at the age of 83, Robert N. Butler, MD, served as president and CEO of the International Longevity Center USA, and professor of geriatrics and adult development at the Brookdale Department of Geriatrics and Adult Development of the Mount Sinai Medical Center in New York.

Dr. Butler was a physician, gerontologist, psychiatrist, public servant, and Pulitzer Prize-winning author who had long been involved in a broad array of social and health issues. He was perhaps best known for his advocacy for the medical and social needs and rights of the elderly and his research on healthy aging and the dementias.

In 1975, Dr. Butler became the founding director of the National Institute on Aging, a division of the National Institutes of Health, where he remained until 1982. In 1982 he founded the Department of Geriatrics and Adult Development at the Mount Sinai Medical Center, the first department of geriatrics in a U.S. medical school, where he served as chairman and Brookdale Professor until 1995. In 1995 he became president and CEO of the International Longevity Center–USA, a policy research and education center, while continuing as professor of geriatrics at Mount Sinai.