Here in Temple Balsall we know soemthing of the human cost of the present and longstanding unrest of Zimbawe as we have a number of resisdents who lived there and love its land and people. 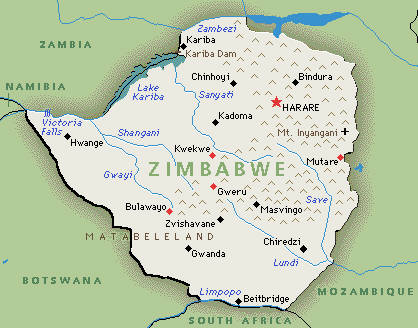 The Primates of the Anglican Communion, meeting in Alexandria, Egypt on 3rd February, 2009, heard first hand reports of the situation in Zimbabwe, and note with horror the appalling difficulties of the people of this nation under the current regime.

We give thanks to God for the faithful witness of the Christians of Zimbabwe during this time of pain and suffering, especially those who are being denied access to their churches. We wish to assure them of our love, support and prayers as they face gross violation of human rights, hunger and loss of life as well as the scourge of a cholera epidemic, all due directly to the deteriorating socio-political and economic situation in Zimbabwe.

It is a matter of grave concern that there is an apparent breakdown of the rule of law within the country, and that the democratic process is being undermined, as shown in the flagrant disregard of the outcome of the democratic elections of March 31st 2008, so that Mr Robert Mugabe illegitimately holds on to power. Even the recent political situation of power sharing, brokered by SADC, may not be long lasting and simply further entrench Mr Mugabe’s regime. There appears to be a total disregard for life, consistently demonstrated by Mr Mugabe through systematic kidnap, torture and the killing of Zimbabwean people. The economy of Zimbabwe has collapsed, as evidenced by the use of foreign currencies in an independent state.

We therefore call upon President Robert Mugabe to respect the outcome of the elections of 2008 and to step down. We call for the implementation of the rule of law and the restoration of democratic processes.

We request that the Archbishop of Canterbury and the Chair of the Council of Anglican Provinces in Africa, in consultation with the Church of the Province of Central Africa, commission a Representative to go to Zimbabwe to exercise a ministry of presence and to show solidarity with the Zimbabwean people. We also request the President of the All Africa Conference of Churches and the Chairman of the Council of Anglican Provinces in Africa to facilitate a meeting with the African Union president and other African political leaders (especially those of SADC) to highlight the plight of the Zimbabwean peoples.

We call upon parishes throughout the Anglican Communion to assist the Anglican Communion Office, the Archbishop of Canterbury’s Office and the Anglican Observer to the United Nations in addressing the humanitarian crisis by giving aid through such mechanisms as the Archbishop of Canterbury is able to designate, and asking that Lambeth Palace facilitate processes by which food and other material aid for Zimbabwe can be distributed through the dioceses of the Church of the Province of Central Africa.

We urge the Churches of the Anglican Communion to join with the Anglican Church of Southern Africa in observing Wednesday 25th February 2009, Ash Wednesday, as a day of prayer and solidarity with the Zimbabwean people.

We affirm the initiative of the Diocese of St Mark the Evangelist (ACSA) in collaboration with Lambeth Palace, the Anglican Communion Office and the Church of the Province of Central Africa in establishing a chaplaincy along the Zimbabwe-South Africa border for the pastoral care of the many refugees, and call upon the Anglican Communion to support this work.