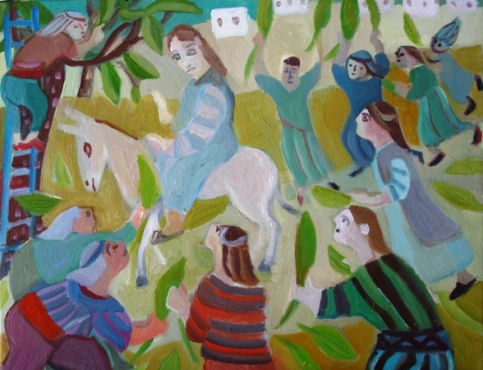 When they had come near Jerusalem and had reached Bethphage, at the Mount of Olives, Jesus sent two disciples, saying to them, ‘Go into the village ahead of you, and immediately you will find a donkey tied, and a colt with her; untie them and bring them to me. If anyone says anything to you, just say this, “The Lord needs them.” And he will send them immediately.’ This took place to fulfil what had been spoken through the prophet, saying, ‘Tell the daughter of Zion, Look, your king is coming to you,

humble, and mounted on a donkey,

and on a colt, the foal of a donkey.’

The disciples went and did as Jesus had directed them; they brought the donkey and the colt, and put their cloaks on them, and he sat on them. A very large crowd spread their cloaks on the road, and others cut branches from the trees and spread them on the road. The crowds that went ahead of him and that followed were shouting, ‘Hosanna to the Son of David!

Blessed is the one who comes in the name of the Lord!

Hosanna in the highest heaven!’

When he entered Jerusalem, the whole city was in turmoil, asking, ‘Who is this?’ The crowds were saying, ‘This is the prophet Jesus from Nazareth in Galilee.’

And so it begins, and ends. We begin today with the exultant cries of “Hosanna”. We will end on Easter with the joyous cries of “Alleluia,” the alleluias that shall never end. Palm Sunday marks the beginning of one long continuous service, going from strength to greater strength, from joy to greater joy. And in between?

There is no going from the beginning to the end without going through the middle;   Easter has no meaning apart from the events of this week which we call Holy Week. In a way, there is no beginning either without, at least, a glimmer of an awareness that there must be a continuing in what we have begun today. How could there not be? The contrasts of this day are just so great.

We who cry “Hosanna” are those who cry “Crucify”. The alleluias of Easter will be but the empty words of the hollow culture of empty souls and empty churches without the moving, heart-rending and mind-blowing spectacles of Maundy Thursday, Good Friday and Holy Saturday; in short, the triduum Sacrum of Holy Week. Such is the intensity of the Passion of Christ. There is no greater joy than the alleluias of Easter, but it is a joy that is borne out of the sorrow and the grief of this week.

The contrasts of this day are the contradictions of our souls. More than the mere fickle nature of mob culture that swings from one moment to the next in the madness of unreason, we contemplate the depths and heights of human loves and human hates in all of their disorder and disarray. The good of Holy week is that we confront the contradictions of our humanity –  in the violence of our wills and in the darknesses of our despairs.

And how? Because of the passion of Christ. Through the one whose story we read this week and in whose story we find ourselves, at once convicted and convinced, at once wretched and redeemed. If we will read.

“For the good that I would I do not: but the evil which I would not, that I do” (Rom. 7.19). Paul captures precisely and completely the reality of our souls. Our culture abhors the directness and the truth of this insight. We want to believe in ourselves and one another, in the basic goodness of humanity. We would like to persuade ourselves that by dint of the power of positive thinking and by way of great dollops of self-esteem we will be happy and successful and good. We would like to think that sin and evil are really only other people or the system, never ourselves.

The great insight and wisdom of this day and this week is that we are totally implicated in all of the forms of sin and evil, suffering and death that ever have been and that ever will be. That is actually the good news! As G.K. Chesterton put it, “there are many who will smile at the saying; but it is profoundly true to say that the glad good news brought by the Gospel was the news of original sin.”  We desperately want to believe in the intrinsic goodness of ourselves even in the face of the compelling evidence to the contrary. Chesterton, again, makes the equally telling point that original sin is “the only doctrine of the Christian faith that is empirically provable.”

Original sin? I mean here the simple point that things are not altogether right with ourselves and our world despite all our intentions and efforts. To know this is actually good news. It is the dialectic of the story of the Fall. We come to know God in our wilful separation from him and discover his love for us in his overcoming of our sin and evil. Such is the project of this week. Sin and love are on full display. Paradoxically, we can’t know the one without the other.

In the crucified Christ we confront our sins and we contemplate the overcoming of sin. Such is the mercy of the Cross. We behold the radical meaning of Christ’s Incarnation. He has come near to us to restore us to the divine fellowship through the most intense and disturbing act of sacrifice and service imaginable; it is the way of the Cross. We can only begin to learn about care and compassion through the intensity of Christ’s passion. Only as convicted of our own sinfulness can we be convinced of the divine love that seeks our good.

The business of this day is to begin, not just with the hosannas of Christ’s triumphal entry as King into Jerusalem, but with the reading of the Passion. We read that we may learn the sovereign nature of God’s love. Christ reigns and rules from the tree of his cross. If we will read.

Christ crucified is “liber charitatis, the book of love, opened to us” to read (Lancelot Andrewes). We read the passion of Christ to learn the lessons of divine love. Only so can we “go and do likewise”, walking in love as Christ has loved us.