On my living room wall above the study in Temple House I have some lithograph reproductions of four biblical scenes by Marc Chagall. These were produced in large quantities in France and I picked them up there very cheaply in a shop in Paris. They are wonderful prints. While on sabbatical they have been some of the material things that I have missed! 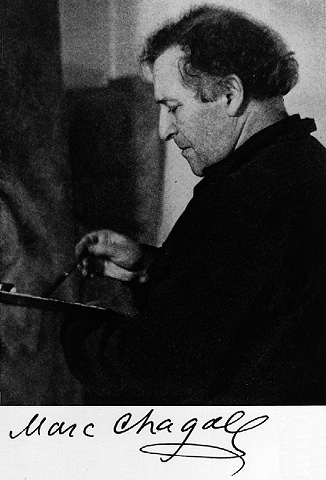 A Russian Jew, Chagall was born in 1887 and lived a good long life dying in 1985! He began studying painting in 1906 and then moved to St Petersburg. This was a difficult time for Jews – they were only allowed to reside with a permit and Chagall spent some time in prison. Despite these difficulties he remained there, married and started a family.

They left for Paris and joined a small group of artists including Leger and Delaunay. There was some movement between Russian and France and Chagall was active in the Russian Revolution. The family had a hard life – escaping the Nazi invasion of France for America – and returning to live in the south of France after the Second World War. I mention this because all of this was to have a significant influence on his painting.

Chagall’s artworks are difficult to categorize. Working in the pre-World War I Paris art world, he was involved with avant – garde  currents, however, his work was consistently on the fringes of popular art movements and emerging trends.

Abounding with references to his childhood, Chagall’s work has also been criticized for slighting some of the turmoil which he experienced. He communicates happiness and optimism to those who view his work strictly in terms of his use of highly vivid colors. Chagall often posed himself, sometimes together with his wife, as an observer of a coloured world like that seen through a stained-glass window.

Here are a couple of images: 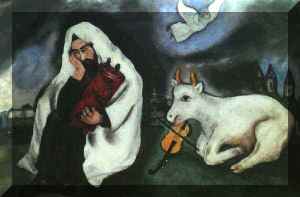 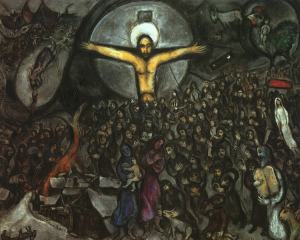 I doubt whether Chagall would have produced such depth and wonder without those early years of struggle. Thank goodness for our rich Jewish heritage.

One thought on “Marc Chagall”