I have always felt a certain amount of ambivalence towards lawyers – based on experience and a little envy at the sheer injustice of a society that pays them so much for their work!

Imagine then the circumstances whereby I choose to buy a lawyers memoirs! Putting money in the direction where none is needed! This lawyer is perhaps an exception that disproves many of my prejudices?

Michael Mansfield QC – a radical, outspoken and risky sort of man who has taken on many cases and causes.

This time he’s written a memoir, a “collage of recollections and reminiscences” where almost every case (chosen, he writes, to highlight a particular legal issue), seems to follow a similar arc: crime, miscarriage of justice/cover-up/whitewash, then Mansfield taking on the establishment, generally in the form of the police, but also forensic scientists, intelligence officers.

It is a wonderful read. I was especially warmed by his defence of the miners caught up in the long and bitter disputes of the mid 1980’s – a dispute that affected my own family profoundly.

Mansfield is a big man, and, at 67, beginning, like a mountain that has suffered a recent landslide, or a balloon half-filled with sand, to succumb to gravity.  Often called a champagne socialist ( and what is wrong with that I ask?) he was roundly mocked for fighting Mohamed Al Fayed’s corner in the Princess Diana inquest; look at the great left-wing crusader went the line, shilling for cash (not that there wasn’t plenty of that, at £575 an hour). Perhaps, but apart from the implicit racism of some of the coverage, which would have denied Al Fayed a fair hearing  was to misunderstand the nature of Mansfield’s politics, which, he readily admits, never involved bringing a pre-existing belief system to bear on the world. “Some people think that I’ve got this Marxism running through the body, a propagandist, or whatever they think I am – in fact, it couldn’t be further from the truth.”

His politics is, rather, reactive and incidental, shaped piecemeal by each successive case he has taken on. “People have said to me, you know, where are you in all this. And from time to time I’ve made some rather glib comments like, ‘Well, I don’t know where I am, because actually I’m more interested in where you are.’ And then you identify, or not, with that position, and then articulate or express it or represent it or whatever – and then when the next one is added and added, and they’re all locked into that situation.” Which would easily cast him as a kind of political mercenary – the job of a barrister, after all, is to take on each case and fight it, regardless.

I challenge anybody not to enjoy this book and have their horzons either changed or brosdened by the quality of the prose. Put it on your Christmas list… 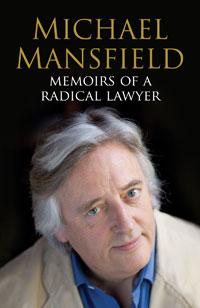