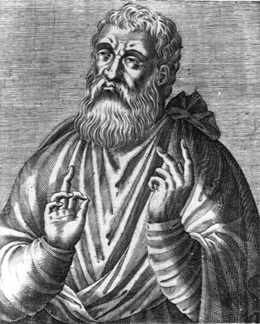 Most of what is known about the life of Justin Martyr comes from his own writings. He was born at Flavia Neapolis (ancient Shechem in Judaea/Palaestina, now modern-day Nablus).

According to church tradition Justin suffered martyrdom at Rome under the Emperor Marcus Aurelius when Junius Rusticus was prefect of the city (between 162 and 168); in records actually contemporary with Justin’s life, Marcus Aurelius was one of the most tolerant Emperors, and even Tertullian claims that Aurelius honoured Christian soldiers. Justin called himself a Samaritan, but his father and grandfather were probably Greek or Roman, and he was brought up a pagan. It seems that St Justin had property, studied philosophy, converted to Christianity, and devoted the rest of his life to teaching what he considered the true philosophy, still wearing his philosopher’s gown to indicate that he had attained the truth. He probably traveled widely and ultimately settled in Rome as a Christian teacher.

In 1882 Pope Leo XIII had a Mass and an Office composed for his feast day, which he set at 14 April the day after the day indicated as that of his death in the Martyrology of Florus; but since this date quite often falls within the main Paschal celebrations, the feast was moved in 1968 to 1 June, the date on which he is celebrated in the Byzantine Rite since at least the ninth century.