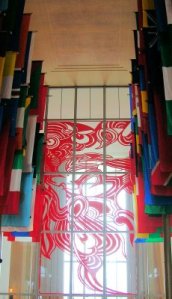 play on – play on. It is heavy rain here in Washington and I can hear the sound of the water on the roof above me that has woken me up. I shall miss this small room that has been my home over April. The blogs have been part of my morning routine – I am surprised that I usually find something to say! I write quickly – and try not to be too polished – 20 minutes random musings. There are some people I have met who ask whether they will appear here but best not to draw unsuspecting folks in like that. It reminds me of a journalist who no one would talk to, because they often found themselves in their column the following day.

I have has some very interesting comments from all kinds of people – my reflections on age are being picked up in a number of places. All in all it is a good way of keeping in touch and having a bit of fun. My control panel tells me how many readers there are – and gieve me a graph of trends! Technology and the wonders thereof.

The highlight of yesterday was this building:

The Kennedy Centre – built in 1971 for a modest 79 million dollars and on a scale that truly is majestic. I arrive early for a concert and wander as tourists do. Its hard to describe the sheer proportions of the place – but the light and colour and sense of openness are on a scale that I have never experienced.

I find some art donated by the Australian Government by John Coburn – six tapestries that depict the Creation. It is great to see his art here. I met Coburn in his studio in Sydney on a visit there in 2001. He gave me a picture which hangs in my study. I love the shapes and symbolism in the pictures.

My favourite interconnecting hallway is the hall of nations – see the first picture above – where 150 flags from across the world hang. A visual reminder of one world full of so much variety and splendour. The music at 3 is very good. The Washington Chorus sing a new haunting piece about the world post 7/11 and the some Brahms and Faure’s Requiem. An interesting mixture. And – as you would expect here – a very enthusiastic response with cheers and whistles and a standing ovation.

I meet a friend for supper at Sequoias for Scallops (my favourite fish) and a small glass of wine! We discuss the possible collaboration of a project relating to the Leveson Centre. She is an academic form Princeton and has kindly written a commendation for my new book on Age.

This is the view from the restaurant windows – the Kennedy Centre at night.