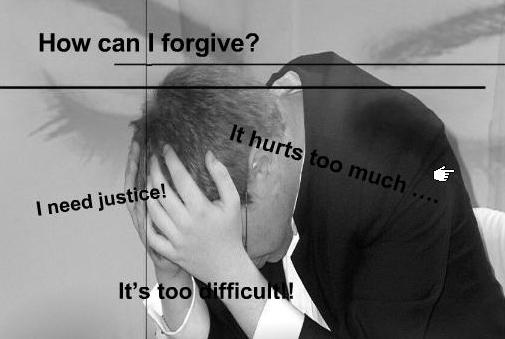 My suggestion is this: that what forgiveness looks like is an ongoing process, again and again, of learning to behave as if death were not, which will mean coming gradually to stand up against those whose being depends on death, and running the risk of being persecuted by them, and maybe even killed by them. In other words, we as addicts are recipients of someone loving us in such a way that he wanted us to be free from our addiction, when we didn’t even know we were addicted, and he chose to set us free from that addiction by making it visible to us that we no longer need live in that way, and that our very being can be unbound from being formed by death. In the degree to which we start to behave towards others in the same way, so we are set free.

Now, here’s the point: forgiveness in this model is precisely not a hermetic self-sealing off from the other whom I declare myself to be nothing at all like. On the contrary, forgiveness turns out to be a creative moving towards someone whom I am like in such a way that they will be free from death with me so that together we will be a new It is not a simple gesture or a pronouncement, but a living towards running the risk of being killed by the person, over time. And what is the reverse of the self-separation of the Nietzschean suspicion that we saw is that if someone moves towards me, and comes to live out my sphere of addiction over time, in order to reach out to me, even if they are in no way moved by my compulsions, by the mere fact of living in my universe they begin to become like me. And by the simple fact of occupying a position of apparent powerlessness within my sphere, they invite me to begin to become like them: they after all occupy the space which I myself am most frightened of occupying, the one to the avoidance of which so much of my energy is dedicated.