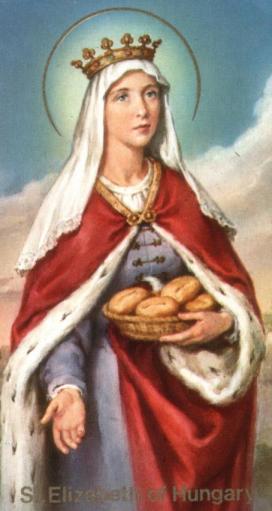 St. Elizabeth was born in Hungary in 1207, the daughter of Alexander II, King of Hungary. At the age of four she was sent for education to the court of the Landgrave of Thuringia, to whose infant son she was betrothed. As she grew in age, her piety also increased by leaps and bounds. In 1221, she married Louis of Thuringia and in spite of her position at court began to lead an austerely simple life, practiced penance, and devoted herself to works of charity.

Her husband was himself much inclined to religion and highly esteemed her virtue, encouraging her in her exemplary life. They had three children when tragedy struck – Louis was killed while fighting with the Crusaders. After his death, Elizabeth left the court, made arrangements for the care of her children, and in 1228, renounced the world, becoming a tertiary of St. Francis. She built the Franciscan hospital at Marburg and devoted herself to the care of the sick until her death at the age of 24 in 1231.

St. Elizabeth is the patron saint of bakers, countesses, death of children, falsely accused, the homeless, nursing services, tertiaries, widows, and young brides. Her symbols are alms, flowers, bread, the poor, and a pitcher.

A prayer to St. Elizabeth

Almighty God, by whose grace your servant Elizabeth of Hungary recognized and honored Jesus in the poor of this world:

Grant that we, following her example, may with love and gladness serve those in any need or trouble.

In the name and for the sake of and through Jesus Christ our Lord, who lives and reigns with you and the Holy Spirit, one God, now and for ever. Amen