Today we remember Dunstan (c.909–19 May 988) was an abbot of Glastonbury, a bishop of Worcester, a bishop of London, and an archbishop of Canterbury who was later canonized as a saint.

His work restored monastic life in England and reformed the English Church. His 11th century biographer, Osbern,  himself an artist and scribe, states that Dunstan was skilled in “making a picture and forming letters”, as were other clergy of his age who reached senior rank.

Dunstan served as an important minister of state to several English kings. He was the most popular saint in England for nearly two centuries, having gained fame for the many stories of his greatness.

Dunstan was born in Baltonsborough. He was the son of Heorstan, a noble of Wessex.

Heorstan was the brother of the bishops of Wells and of Winchester. It is recorded his mother, Cynethryth, was a pious woman. Osbern relates that a messenger miraculously told her of the saintly child she would give birth:

The anonymous author of the earliest Life places Dunstan’s birth during the reign of Athelstan, while Osbern fixed it at “the first year of the reign of King Æthelstan”, 924 or 925.

School to the king’s court

As a young boy, Dunstan studied under the Irish monks who then occupied the ruins of Glastonbury abbey. Accounts tell of his youthful optimism and of his vision of the abbey being restored. While still a boy, Dunstan was stricken with a near-fatal illness and effected a seemingly miraculous recovery. Even as a child, he was noted for his devotion to learning and for his mastery of many kinds of artistic craftsmanship. With his parent’s consent he was tonsured, received minor order and served in the ancient church of St Mary.

He became so well known for his devotion to learning that he is said to have been summoned by his uncle Athelm, the archbishop of Canterbury, to enter his service. He was later appointed to the court of King Athelstan. 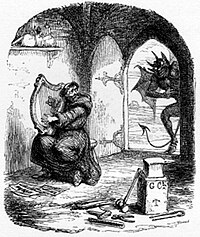 Dunstan playing his harp as the devil is paying a visit.

Dunstan soon became a favourite of the king and was the envy of other members of the court.

Possible self-portrait of Dunstan. Detail from the Glastonbury Classbook.

Dunstan worked as a silversmith  and in the scriptorium while he was living at Glastonbury. It is thought likely that he was the artist who drew the well-known image of Christ with a small kneeling monk beside him in the Glastonbury Classbook, “one of the first of a series of outline drawings which were to become a special feature of Anglo-Saxon art of this period.”Dunstan became famous as a musician, illuminator, and metalworker.

Lady Æthelflaed, King Æthelstan’s niece, made Dunstan a trusted adviser and on her death she left a considerable fortune to him. He used this money later in life to foster and encourage a monastic revival in England. About the same time, his father Heorstan died and Dunstan inherited his fortune as well. He became a person of great influence, and on the death of King Æthelstan in 940, the new King, Edmund, summoned him to his court at Cheddar and made him a minister.

Again, royal favour fostered jealousy among other courtiers and again Dunstan’s enemies succeeded in their plots. The king was prepared to send Dunstan away. There were then at Cheddar certain envoys from the “Eastern Kingdom”, which probably meant East Anglia. Dunstan implored the envoys to take him with them when they returned to their homes. They agreed to do so, but it never happened. The story is recorded: