Cymer Abbey is a ruined Cistercian abbey near the village of Llanelltyd, just north of Dolgellau, Gwynedd, in north-west Wales. 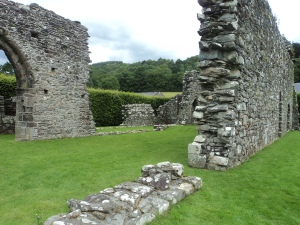 It was founded in 1158-9 and dedicated to the Virgin Mary under the patronage of Maredudd ap Cynan ab Owain Gwynedd (d. 1212), Lord of Merioneth and grandson of Owain Gwyned and his brother, Gruffudd ap Cynan, prince of N. Wales (d. 1200).   It was a daughter house of Abbey Cwmhir in Powys. 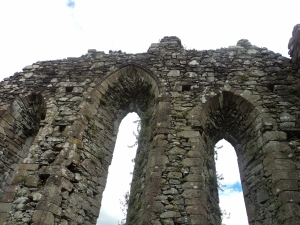 The remains of the church and west tower are very plain, but substantial with walls surviving about nave archway height. It is a simple nave with aisles, lacking northern and southern transepts, and the choir and presbytery are incorporated into the nave. The abbey has buff sandstone dressings and some red sandstone carvings, but is primarily of local rubble construction.  The foundations of the cloister and other monastic buildings are visible to the south. The abbot’s house remain to the west of the site and have been extensively remodelled as a farmhouse.

Like other Cistercian communities in Wales, Cymer Abbey farmed sheep and bred horses, supplying them to Llywelyn ap Iorwerth, Llewelyn the Great. Llewelyn gifted the Abbey mining rights in 1209. However, despite this the Abbey was not prosperous: it lacked much arable land and had limited fishing rights . In 1291 annual income was £28 8s 3d. The Welsh Wars of [Edward I] (1276-77 and 1282-3) probably contributed to the abbey’s relative poverty, for instance the failure to build the usual Cistercian central tower is one indication of this. While Alun John Richards argues that the cooler climate of the 14th century unduly affected the Abbey’s lands which were largely mountainous.

The Abbey was a base for the troops of Prince Llywelyn ap Gruffudd in 1275 and 1279. In 1283 Edward I occupied the Abbey and a year later gave the Abbey compensation of £80 for damage caused in the recent wars.

By 1388 the monastery was home to no more than five monks and it seems that there was a marked decline in the standard of religious observance. In the survey of 1535, the annual income of the house was valued at little over £51 and the abbey was dissolved with the smaller monasteries in 1536-7, most likely in March 1537. The monastery was small and relatively unimportant. 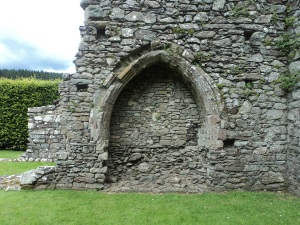 A small stream runs south of the cloister, and the site is on the banks of the River Mawddach and lies just above the confluence of the River Wnion with the Mawddach Cymer; and therefore the monastery was given the full title of Kymer deu dyfyr, which means ‘the meeting of the waters’. It was sited at the lowest ford across the Mawddach. 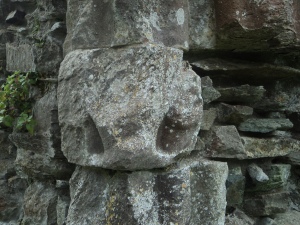 As with other monastic sites in England and Wales, the abbey did not survive the Dissolution of the 1530s, and parts of the fabric were recycled for their dressed stone.