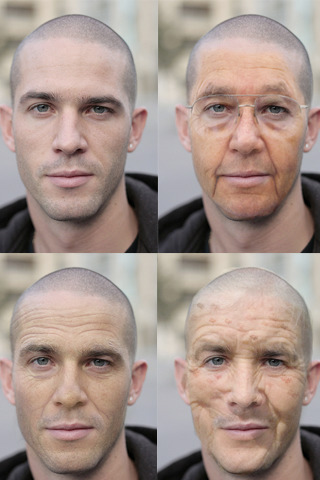 In a science museum, there is one exhibit in particular which attracted long lines of children: “Face Ageing”. A child sits down in front of an automatic camera and has their portrait taken. They wait and their digitized bust appears on a TV. monitor. Then, tapping a button like a VCR remote, each child could rapidly call up simulations of what she or he would look like at one year intervals, up to the age of 69. In seconds, the computer added grotesque pouches, reddy skin and blotches to their familiar features; the faces become elongated, then wider and then saggy. Lines become more heavily rutted. Boys lost hair, hair turned grey. The heads of both girls and boys grew then shrunk.

I watched on as an idle observer, amazed at the response. “I don’t want to get old”, said one boy while another child commented, unkindly perhaps, on a friend “he’s disgusting at 42”. Thanks, I thought to myself!

Nobody stayed in the booth long. Anyone could have stopped punching the button altogether at any age, or lingered longer at a particular age. But most swept through the changes of their punitive face course to the bitter end. They came out pre-occupied, distracted, some giggling recklessly, most edging away fast, not wanting to talk about the experience, not knowing what had happened in there. I think that most of the children came away feeling that they did not want to get old.

As Virginia Wolf says, “If you are young, the future lies upon the present, like a piece of glass, making it tremble and quiver.” Because I think it is part of a wider and interesting picture of a society prepared to face some of the cultural challenges and opportunities of ageing.

People who are prepared to reflect on age, even if, or especially if, it fills them with fear, are surely all better prepared to think about the choices that might surround the shape of ageing for them as individuals or communities.