Today we commorate The Venerable Bede 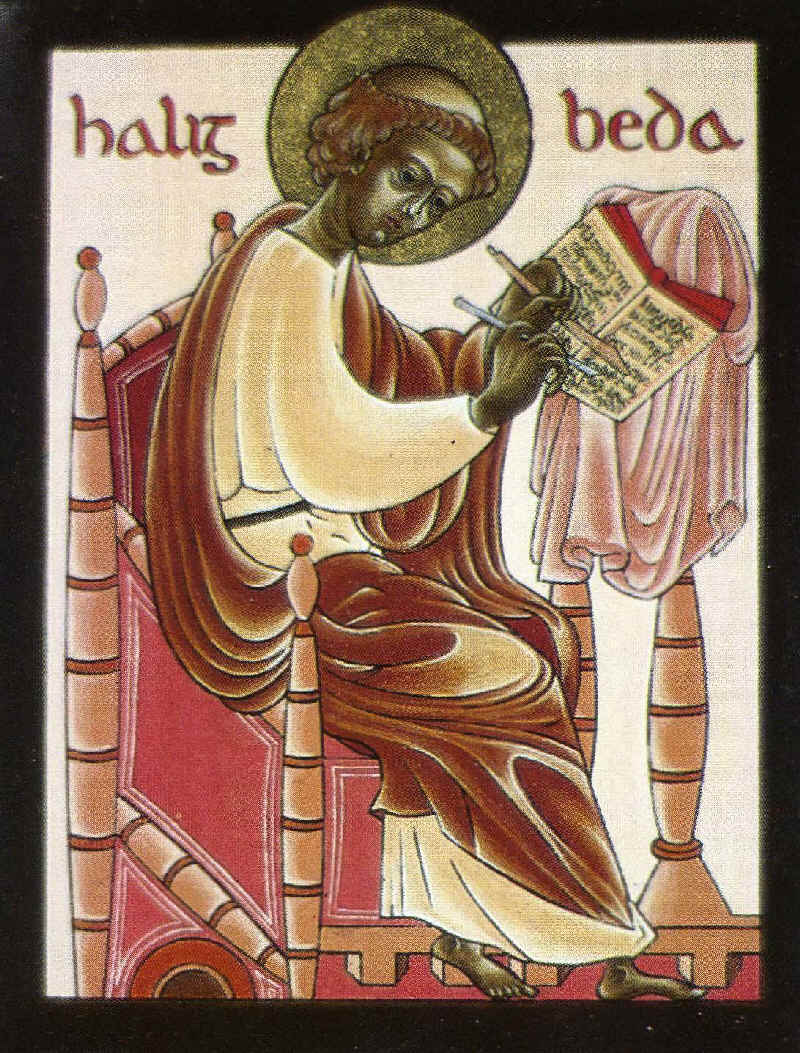 Almost everything that is known of Bede’s life is contained in the last chapter of his Historia Ecclesiastica, a history of the church in England. It was completed in about 731, and Bede implies that he was then in his fifty-ninth year, which would give a likely birth date of about 672–673.  A minor source of information is the letter by his disciple Cuthbert which relates Bede’s death. Cuthbert is probably the same person as the later abbot of Wearmouth-Jarrow, but this is not entirely sure.Bede, in the Historia, gives his birthplace as “on the lands of this monastery”. He is referring to the twinned monasteries of Wearmouth and Jarrow  near modern-day Newcastle-on-Tyne and Sunderland, respectively; both have been claimed as his birthplace, and there is also a tradition that he was born at Monkton, two miles from the monastery at Jarrow. Bede says nothing of his origins, but his connections with men of noble ancestry suggest that his own family was well-to-do. Bede’s first abbot was Benedict Biscop, and the names “Biscop” and “Beda” both appear in a king list of the kings of Lindsey from around 800, further suggesting that Bede came from a noble family. His name is uncommon, only occurring twice in the Liber Vitae of Durham Cathedral, one of which is assumed to be the writer. There is also a Bieda who is mentioned in the Anglo-Saxon Chronicle under the year 501, but these are the only mentions in manuscripts of the name. The name probably derives from the Old English bēd, or prayer, and if it was the name given Bede at birth, probably meant that his family had planned on his entering the clergy from birth.

At the age of seven, he was sent to the monastery of Wearmouth  by his family to be educated by Benedict Biscop and later by Ceolfrith.  Bede does not say whether it was already intended at that point that he would be a monk. It was fairly common in Ireland at this time for young boys, particularly those of noble birth, to be fostered out; the practice was also likely to have been common among the Germanic peoples in England. Wearmouth’s sister monastery at Jarrow was founded by Ceolfrith in 682, and Bede probably transferred to Jarrow with Ceolfrith that year. Four years later, in 686, plague broke out at Jarrow. The Life of Ceolfrith, written in about 710, records that only two surviving monks were capable of singing “with antiphons”; one was Ceolfrith, and the other a young boy of 14, thought by most historians to have been Bede.

When Bede was about 17 years old, Adomnan, the abbot of Iona Abbey, visited Wearmouth and Jarrow. Bede would probably have met the abbot during this visit, and it may have been Adomnan who sparked Bede’s interest in the Easter dating controversy. In about 692, in Bede’s nineteenth year, Bede was ordained a deacon by his diocesan bishop, John, who was bishop of Hexham. The canonical age for the ordination of a deacon was 25; Bede’s early ordination may mean that his abilities were considered exceptional,but it is also possible that the minimum age requirement was often disregarded. There may have been minor orders ranking below a deacon; but there is no record of whether Bede held any of these offices. In Bede’s thirtieth year (about 702) Bede became a priest, with the ordination again performed by Bishop John. 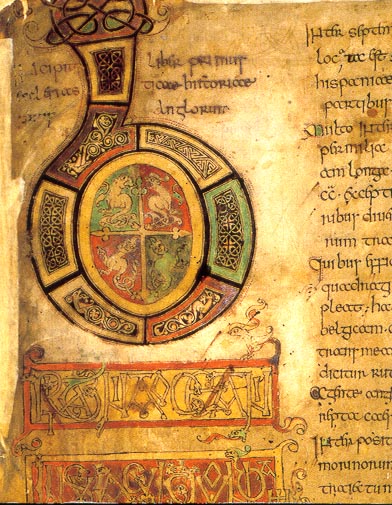 In about 701 Bede wrote his first works, the De Arte Metrica and De Schematibus et Tropis; both were intended for use in the classroom.He continued to write for the rest of his life, eventually completing over 60 books, most of which have survived. Not all of his output can be easily dated, and Bede may have worked on some texts over a period of many years.His last surviving work is a letter to Ecgbert of York, a former student, written in 734. A sixth century manuscript of Acts that is believed to have been used by Bede is still extant. Bede may also have worked on one of the Latin bibles that were copied at Jarrow, one of which is now held by the Laurentian Library.  Bede was a teacher as well as a writer; he enjoyed music, and was said to be accomplished as a singer and as a reciter of poetry in the vernacular.

In 708, a number of monks at Hexham accused Bede of heresy, because his work De Temporibus offered a different chronology of the Six Ages of the world theory than the one commonly accepted by theologians. The accusation occurred in front of the bishop of Hexham of the time, Wilfrid, who was present at a feast when some drunken monks made the accusation. Wilfrid did not respond to the accusation, but a monk present relayed the episode to Bede, who replied within a few days to the monk, writing a letter setting forth his defence and asking that the letter be read to Wilfrid also. Bede had another brush with Wilfrid, for the historian himself says that he met with Wilfrid, sometime between 706 and 709, and discussed Æthelthryth, the abbess of Ely. Wilfrid had been present at the exhumation of her body in 695, and Bede questioned the bishop about the exact circumstances of the body and asked for more details of her life, as Wilfrid had been her advisor.

In 733, Bede traveled to York, to visit Ecgbert, who was then bishop of York. The see of York was elevated to an archbishopric in 735, and it is likely that Bede and Ecgbert discussed the proposal for the elevation during his visit. Bede also traveled to the monastery of Lindisfarne, and at some point visited the otherwise unknown monastery of a monk named Wicthed, a visit that is mentioned in a letter to that monk. Because of his widespread correspondence with others throughout the British Isles, and due to the fact that many of the letters imply that Bede had met his correspondents, it is likely that Bede traveled to some other places, although nothing further about timing or locations can be guessed.Bede hoped to visit Ecgbert again in 734, but was too ill to make the journey. He died on 26 May 735 and was buried at Jarrow. Cuthbert’s letter is mainly concerned with relating the last days of Bede, and mainly has interest for two things, one that Bede was still struggling to complete works right before his death, and two, the relating of a poem that Bede composed on his deathbed.Bede’s remains may have been transferred to Durham Cathedral in the 11th century; his tomb there was looted in 1541, but the contents were probably reinterred in the Galilee chapel at the cathedral. 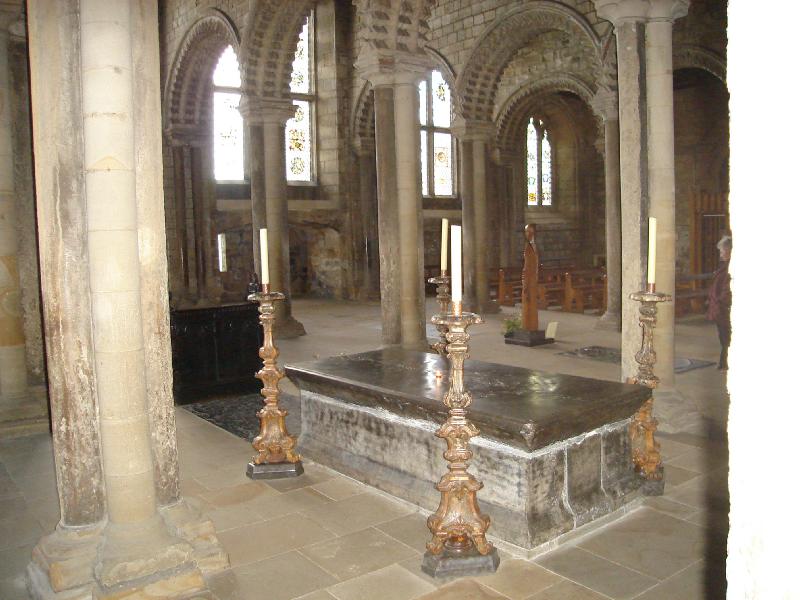